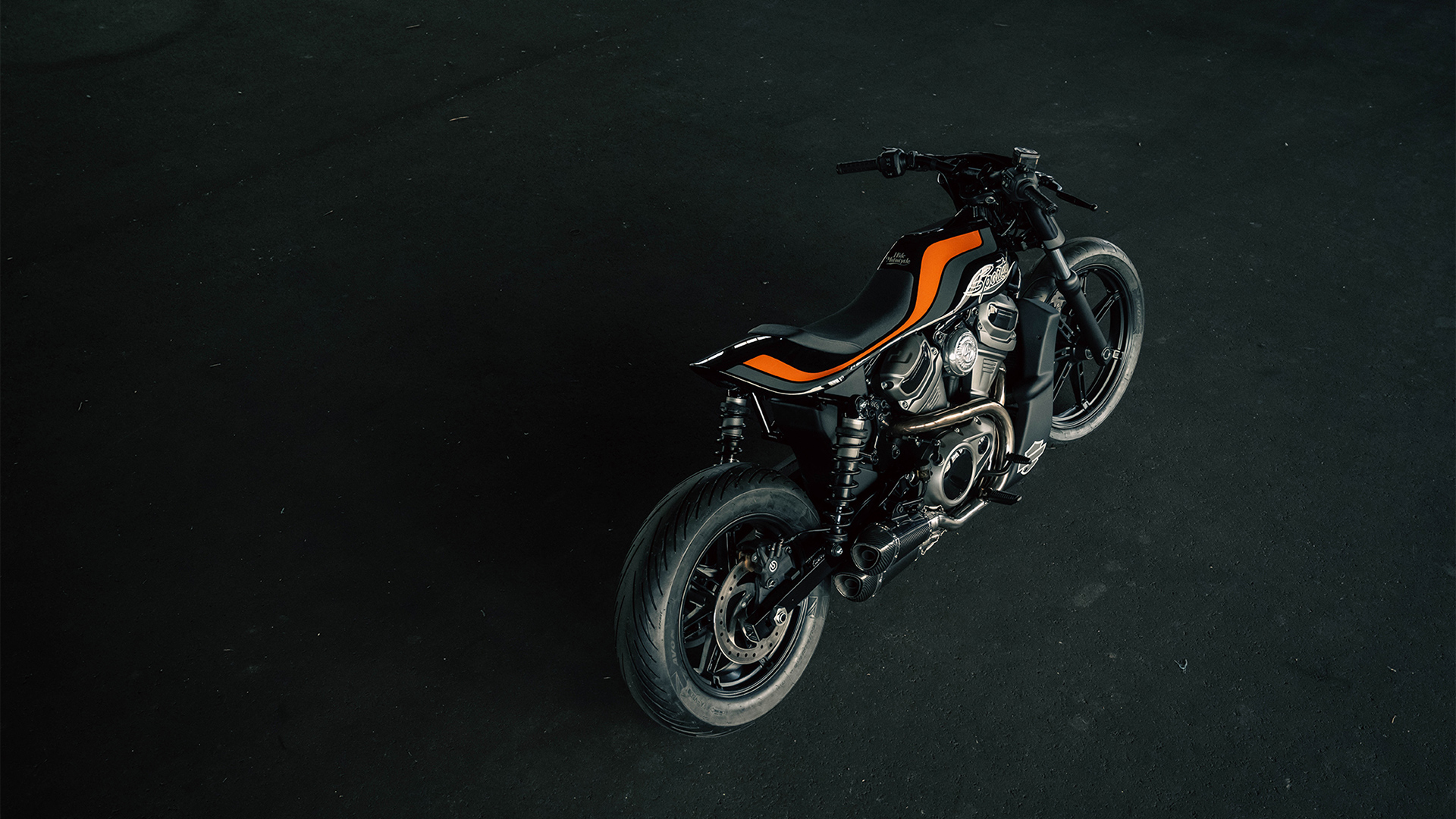 HIDE MOTORCYCLE participated the "NIGHTSTER Custom Project”,
where six custom builders carefully selected from all over the world by the US HARLEY-DAVIDSON head office and asked to freely customize the new NIGHTSTER.
This complete bike is based on the custom bike “JST” as the outcome of the project.

Born from the project led by H-D in the United States, The true gem of NIGHTSTER custom

It all started with the "NIGHTSTER® Custom Project" organized by Harley-Davidson Headquarters in the United States (hereafter H-D) coincided with the debut of the NIGHTSTER, a new model for 2022.

H-D selected six custom stores from around the world and asked them to customize the NIGHTSTER with their own aesthetics, and HIDE MOTORCYCLE was selected as the only custom builder from Japan to participate. That custom bike made by HIDE MOTORCYCLE was named "JST", which is inspired by a street tracker. After JST was unveiled to the Japanese media, it flew to the United States and was invited to the world's largest old-school chopper show "BORN FREE" in June. The one-piece aluminum exterior design from the tank cover to the seat cowl, and the style that is derived from street driving while using a flat track racer as a motif, stood out even at the show. It’s slated to be displayed at H-D dealers throughout the United States and eventually exhibited at the H-D Museum. This is the first time that H-D HQ appointed a Japanese builder as a partner to carry out a project together. It was the moment that HIDE MOTORCYCLE's aesthetics and skills in custom building is recognized, and that the H-D headquarters has turned their attention to the Japanese custom scene.

Mr. Togashi, the representative of HIDE MOTORCYCLE, was planning this project while producing JST. It is the only custom motorcycle in the world whose exterior is handmade from aluminum plates, and it reproduces the complex shape with a glass fiber body. After three rounds of molding and modification based on the original JST, he has finally succeeded in reproducing the unique curvature, bulge, and shape of the aluminum body, which is the true essence of the JST. HIDE MOTORCYCLE, which has customized more than 100 Sportsters to date, has now added a complete custom NIGHTSTER-based "JST" to its customization menu. Although it is a kit bike specification that adopts its own glass fiber body and rear frame, the parts are not sold separately, and each one is produced on a semi-order basis. In other words, you can order your own "JST" complete custom by selecting prferred paint and detail options. Traditionally, most street customs is brushed up through repeated research and trial & error by custom builders considering the trends of the times and the characteristics of the base models. The highest level of custom options for NIGHTSTER has just been unveiled from Japan.

Inspired by the "Street Trucker”, the motorbike swept the streets of Japan in the 1990s and 2000s

Upon working on the customization of the new NIGHTSTER, HIDE MOTORCYCLE’s theme was a bike based on a flat tracker style. At the beginning of the project, we drew a number of sketches to define the ideal style. Flat track racing is an iconic race which earned its popularity in the United States over the centuries. However, we envisioned a flat tracker instead of a real race bike. As we're not committed to flat-track racing, real race bike doesn't fit.

Instead, we aimed to create a new custom bike inspired by "street tracker," which was born from the Japanese custom scene in the 1990s and 2000s, and completed with the HIDE MOTORCYCLE's unique techniques and essence.

In Japan, the distinctive style of the period undoubtedly sparked the street customization scene that continues to this day, and we believe it is the cornerstone of the Japanese H-D customization culture. In order to take advantage of the excellent response of the new Sportster engine, the riding posture was changed to a compact position that allows aggressive operation, and the bike was designed to bring out its true sport performance for enjoyable street riding.

Both the frame and engine of the NIGHTSTER are newly designed to differentiate it from the previous Sportsters equipped with OHV engines. It was an unknown base model even for us, who have worked on more than 100 custom Sportster units. While the standard methods of HIDE MOTORCYCLE's Sportster customization could not be used in every case, we aimed to create a trucker-style custom that can run through the hustle and bustle of the city with ease.

At the early stage, we decided not to modify the main frame of JST. One of the main reasons was that we wanted to create a custom bike that utilized the prototype of the base model, given that we were honored to be commissioned by the manufacturer for this project. Moreover, although changing the vibe of the normal model is possible if it is a full scratch requiring overhaul, we decided that keeping the basic framework of the vehicle and changing its look with the design of the parts would be a better way to create a vehicle every Nightster user would dream of. This concept led to the development of complete customization.

We manufacture it one by one on semi-order basis.
Based on the JST as the outcome of the project with H-D, you can order your own "JST" complete custom with the choice of your paint and the detail options.
If you are interested or would like to place an order, please contact us below.
Base vehicle fee is excluded / base vehicle can be provided by a client 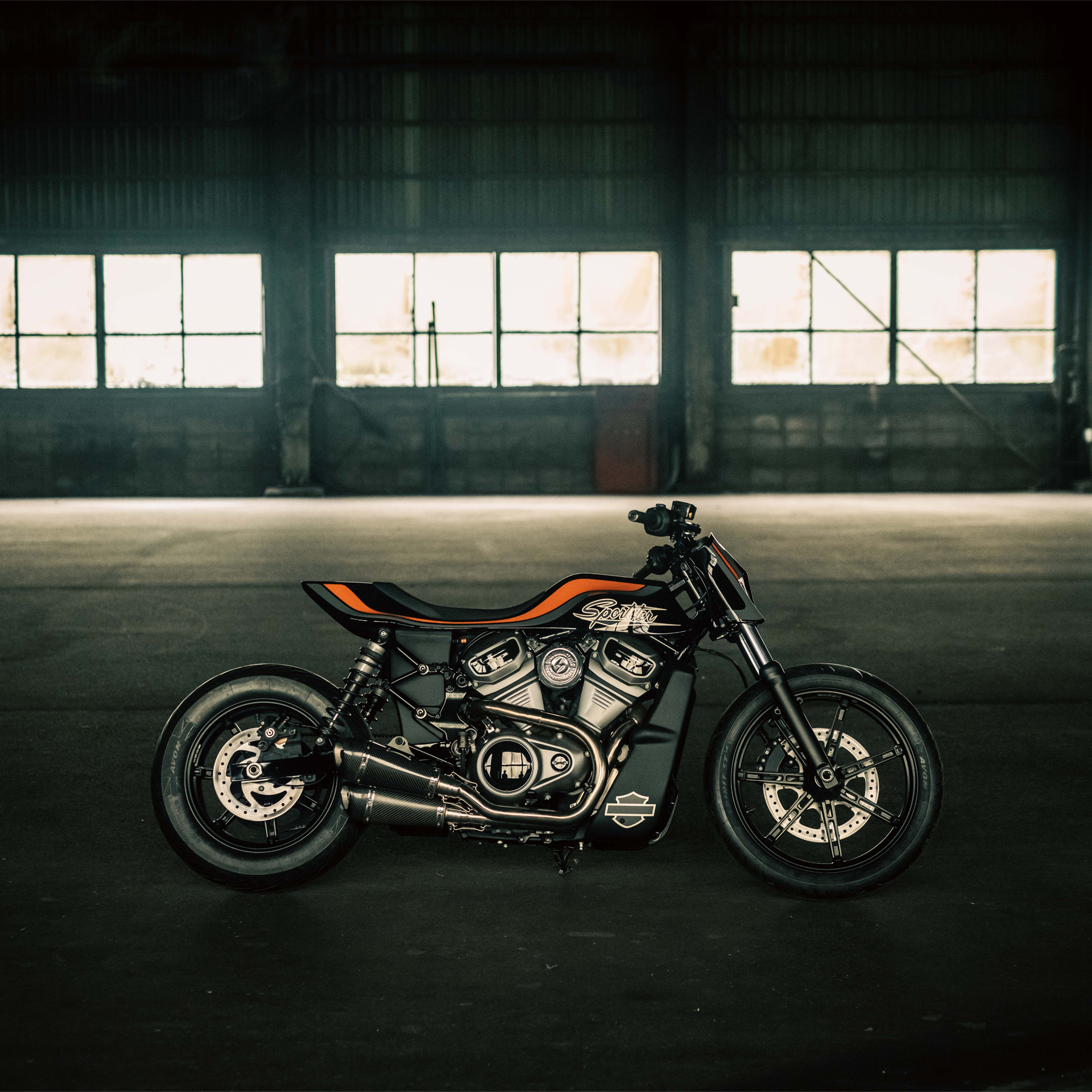